Meetings with Ivor is an 81-minute documentary on the life and work of ground-breaking psychiatrist Ivor Browne. Browne has been a central figure in Irish mental health for many decades. His pioneering and often controversial work on behalf of the many who cannot speak for themselves is well-known.

Alan Gilsenan’s acclaimed new film, produced by Tomás Hardiman, captures the essence of this extraordinary man. In a quirky and challenging cinematic portrait we meet Browne, now in his late-eighties, who is still full of energy, good humour and compassion, and who remains a deeply-informed, startlingly innovative thinker. His unique attributes continue to find vital expression and offer real hope in an increasingly bewildering world. The film contains contributions from a host of familiar faces including Tommy Tiernan, Tom Murphy, Mary Coughlan and Professor Brendan Kelly. Sebastian Barry and Nell McCafferty also feature among contributors. The piper, Ronan Browne, son of Ivor, composed the haunting musical score.

More than 5000 people saw this film in its first weeks. This is a phenomenal record for a new Irish documentary. It had a premiere screening at Dublin’s IFI Cinema on January 14th last, attended by President of Ireland, Michael D Higgins. Demand was such that two extra screenings had to be added the following day. Since then,it’s being screened around the country and has been garnering 4 and 5-star reviews and lots of positive reactions from audiences young and old.

‘Since the IFI opened I have never seen such demand for a new Irish documentary. We've experienced queues out the door and have had to extend the planned run.’

Chiara Kelly at the Eye Cinema in Galway said

‘Last night demand exceeded supply and we had to upgrade to our biggest cinema. The Q&A session with the director went down a treat. We are extending the film's run at the Eye also. It's been creating quite a stir here.’

A new film from the makers of Meeting with Ivor

Where to watch Meetings with Ivor The DVD contains a host of extras including extensive out-takes from the full Ivor Browne interviews, director’s commentary, a visit to Ivor’s ancestral home, family music and insights into Ivor’s lifelong spiritual practice.

The extended edition DVD is also available to buy at the IFI FILMSHOP and other outlets now.

A film of immense importance

A great insight into a fascinating man

Photos from the premiere screening of ‘Meetings with Ivor’ which took place with the President of Ireland Michael D. Higgins in attendance in the IFI Cinema Dublin on 14 January 2017 during the First Fortnight Festival. (All photos by Daniel Anderson – IFI unless otherwise noted). 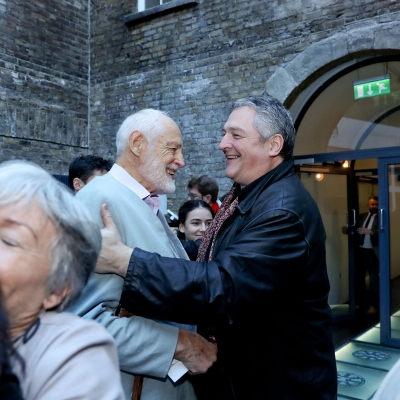 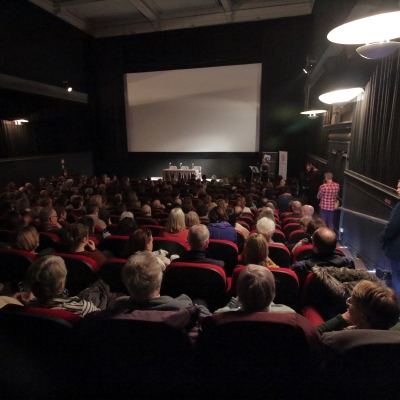 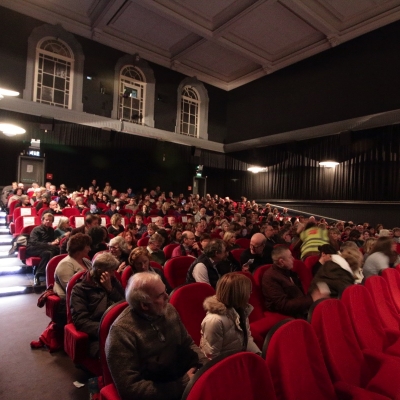 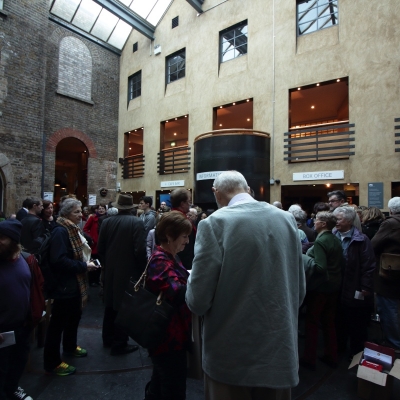 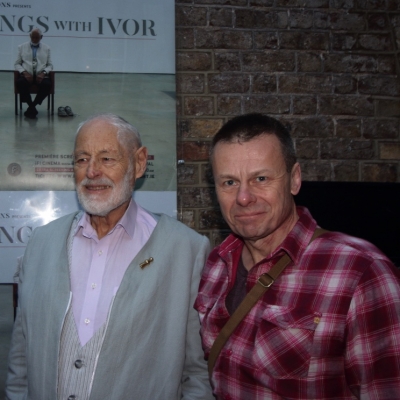 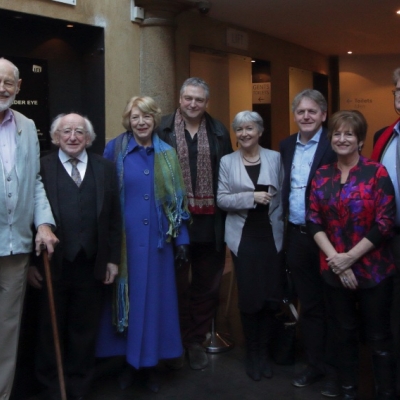 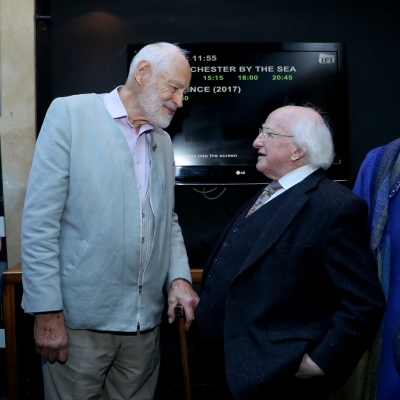 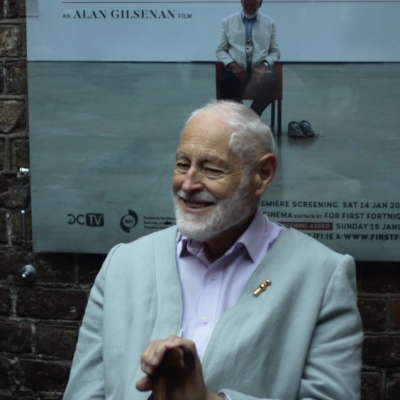 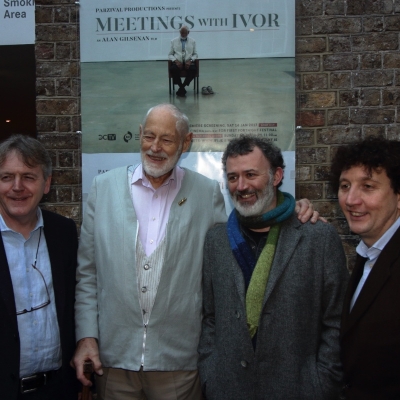 Filmed on location in Visual Carlow and The Lab, Dublin

IVOR BROWNE
Born in Dublin, after his initial studies at the Royal College of surgeons, Ivor Browne worked in Oxford, London, Harvard and Dublin and went on to become Professor of Psychiatry at University College, Dublin and Chief Psychiatrist of the Eastern Health Board. His opposition to orthodox psychiatry made him a vital and controversial figure in Irish public life up until his retirement in the mid-90s. He conceived and was director of the Irish Foundation for Human Development. This set up the first Community Association in Ireland in Ballyfermot, one of the early large housing estates in Dublin. His books include ‘Music and Madness’ and ‘The Writings of Ivor Browne’ both published by Cork University Press.

ALAN GILSENAN Director
Alan Gilsenan is an award-winning filmmaker, writer and theatre director. He established himself as one of Ireland’s iconoclastic film directors with The Road to God Knows Where (1988). Working from his own company “Yellow Asylum Films,” he has directed over thirty films and documentaries for cinema and TV that have been seen in international releases, festival screenings and national broadcasts, including: The Green Fields of France (1998), All Souls’ Day (1998), Zulu 9 (2001), The Ghost of Roger Casement (2002), Timbuktu (2004) The Yellow Bittern (2009), Ó Pheann An Phiarsaigh (2011), Eliza Lynch: Queen of Paraguay (2013) and A Vision: A Life of W. B. Yeats (2014). His most recent feature film Unless, which he wrote and directed, featured in this year’s Dublin Film Festival and will be on release later this year. Winning Jacobs, IFTA and European Film Awards, he has also served as Chair of the Irish Film Institute, and as a member of the Irish Film Board and the RTÉ Authority

TOMÁS HARDIMAN Producer
Tomás is a graduate of NUI Galway and Dublin City University. In the early 1980s he worked for a time in Toronto, where he began a professional career in the theatre as General Manager of Mercury Theatre Company. Following his return to Ireland he was appointed Marketing/Publicity Director of The Abbey Theatre where he worked from 1985 to 1993. He subsequently returned to Galway where he runs his own communications and independent film production company, Parzival Productions. From October 2002 to November 2007 he was Managing Director of Galway Arts Centre and the Cúirt International Festival of Literature. In 2013 he completed a three-year training programme to become a teacher of the Alexander Technique. He produced eight short films and documentaries between 1998 and 2003 and Meetings with Ivor in 2017. A new film, The Meeting, written and directed by Alan Gilsenan is in pre-production.

COLM HOGAN Director of Photography
Colm has been working in the Film and TV industry in Ireland for over twenty years. His work has taken him throughout Ireland, England, Europe, North America, Africa, Russia and even as far as Mongolia, working on a broad range of documentary and drama projects. Following in the footsteps of Seamus McGarvey, Colm began his career as a stills photographer.
Colm began is career as a DOP when in 2001 he co-shot the IFTA winning feature Documentary Oileán Thoraí directed by Pat Collins. Since then Colm has shot 17 of Pat Collins’s films. He has also shot numerous drama series and shorts.
With over twenty years of working in various artforms in Ireland Colm brings a broad range of knowledge and a highly creative eye to every project. www.colmhogan.com

CÚÁN MAC CONGHAIL Editor
Cúán has been working as a film editor for over 20 years. Trained in the BBC, he has edited feature films, documentaries and many hours of high quality television programmes. His work has been nominated and won many national and international awards. He has also directed numerous documentaries in addition to the occasional forays into producing. www.macallateo.com

RONAN BROWNE Music
Ronan is an Irish musician and composer. He plays the uilleann pipes and sings with the band Cran, and also plays in a duet with Peter O'Loughlin. He was the original piper with both Riverdance and the Afro Celt Sound System. Browne has also contributed music to the film soundtracks of Circle of Friends, Rob Roy, Robin of Locksley, The Secret of Roan Inish, Streets of Gold, Gangs of New York, and the TV series Bringing It All Back Home. www.ronanbrowne.com

Listen to a selection of early musical recordings of Ivor and his mother and father. Courtesy of Ronan Browne.
Click a title below to play. 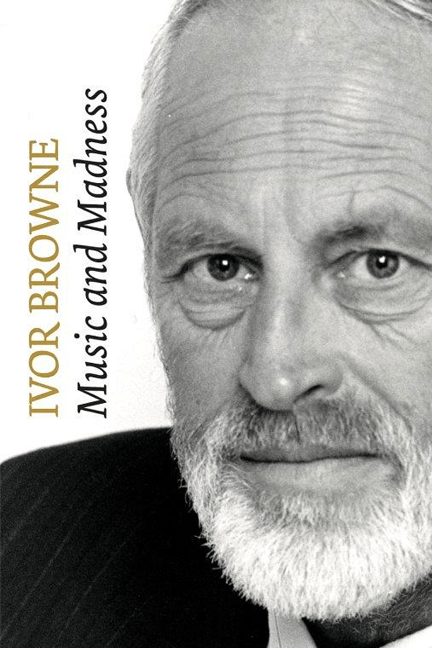 
The Writings of Ivor Browne 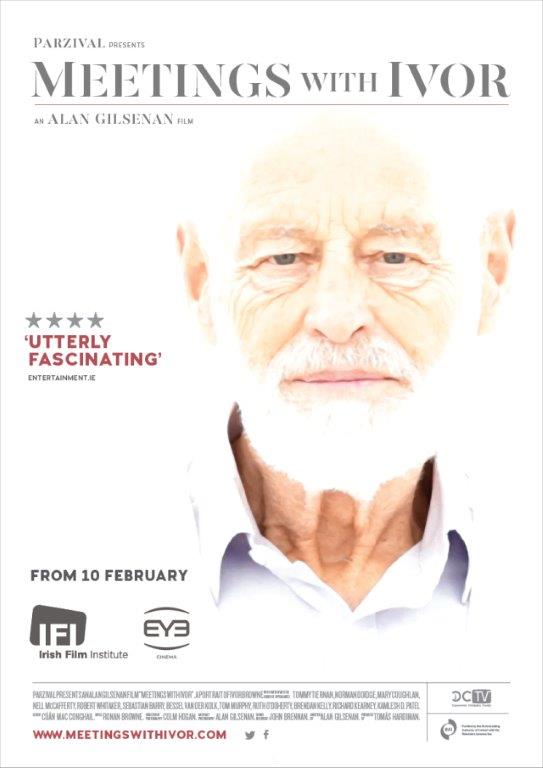 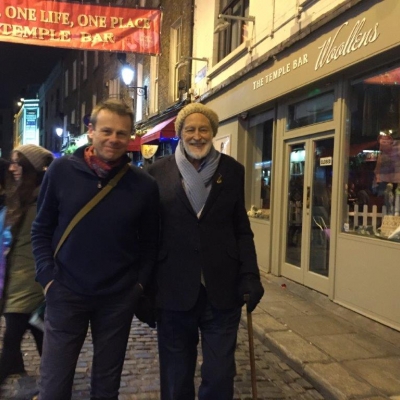 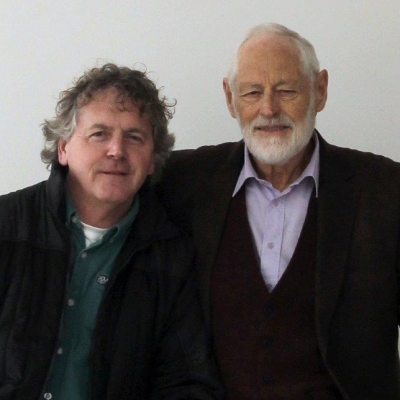 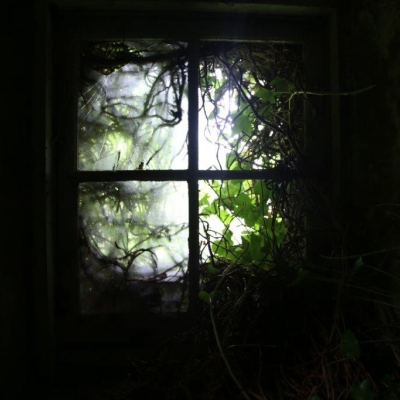 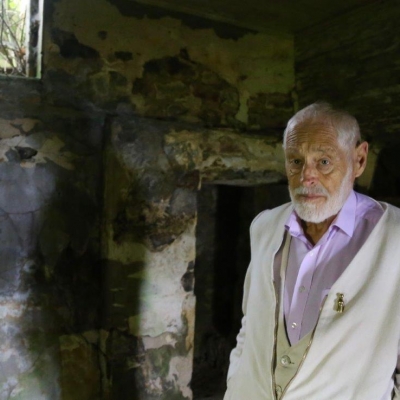 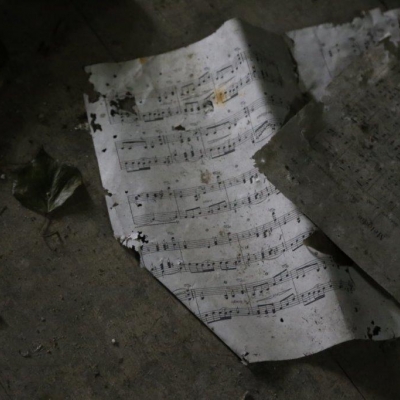 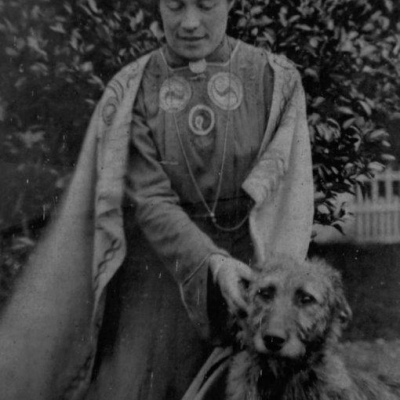 With the participation of: